The weather will remain mainly sunny and dry today with highs in the mid to upper 80s. Late today, a cold front will cause clouds to increase late in the day with scattered showers arriving after midnight. Limited moisture levels means rain amounts should be less than one-quarter inch, and many locations are likely to stay dry.

FRIDAY NIGHT LIGHTS: For the high school games tonight, the sky will be mostly cloudy with a shower possible at some stadiums, mainly across Northwest Alabama; temperatures will be in the 70s.

FALL TEMPERATURES AT LAST: The much anticipated front passes through the state early Saturday morning with clouds and a thin band of showers and storms. The rain will end very early in the day, likely before sunrise for much of South/Central Alabama. You will notice once the front passes your locations as a refreshing north breeze of 10-20 mph will deliver the drier and cooler air with a clearing sky and temperatures mainly in the upper low and mid 70s. Saturday night will be a clear and chilly one with a diminishing wind, we project a lows early Sunday morning in the 40s. Sunday will be a fantastic fall day with abundant sunshine with a highs near 75°. Sunday night will be another chilly one with widespread 40. This will be coldest air so far this season for most communities.

FOOTBALL FORECAST: AUBURN AT ARKANSAS (11a CT kickoff in Fayetteville): A beautiful fall day in Arkansas. Sunshine in full supply with temperatures rising from 62 at kickoff into the mid 60s by the second half.

TROY AT TEXAS STATE: (2:00p CT kickoff in San Marcos, TX): A cloudless sky; lots of sunshine with temperatures in the 70s.

ALABAMA AT MISSISSIPPI STATE (6:00p CT kickoff in Starkville): Perfect football weather. A clear sky with temperatures falling from near 67 at kickoff, into the 50s by the second half.

NEXT WEEK: The week starts off cool and dry with highs in the 70s/80s and lows in the 50s/60s as the fall air and quiet weather pattern will persist. By the end of the week, the models are still suggesting some showers return to the area with a feature lifting out of the Gulf. This would be a quick hitting system with another cooler and drier air mass arriving by the following weekend. 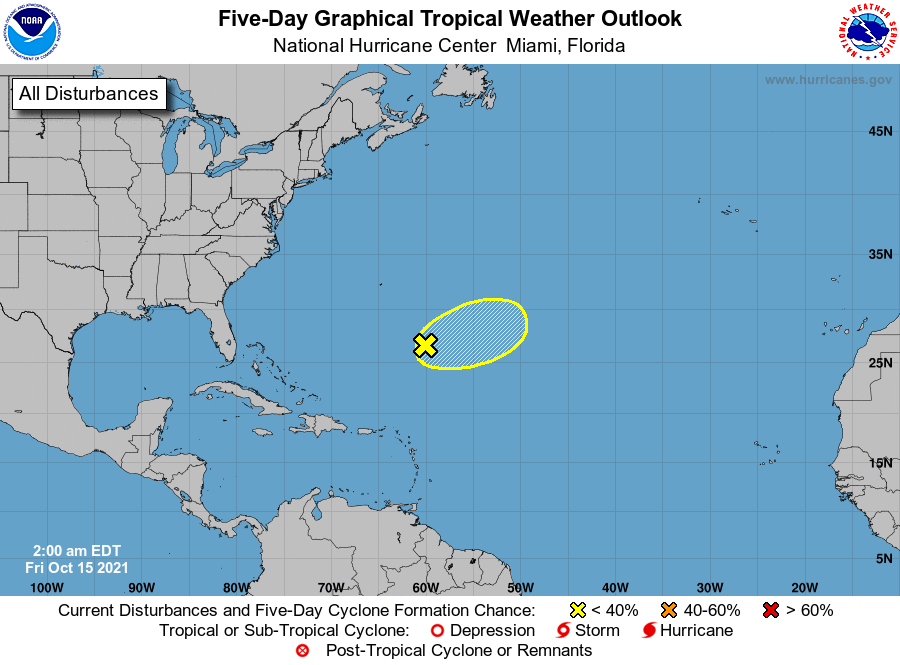 IN THE TROPICS: Shower and thunderstorm activity associated with an elongated area of low pressure located more than 500 miles southeast of Bermuda has become more concentrated to the east and southeast of the center over the past several hours. Strong upper-level winds, however, are expected to prevent additional development of this system through Friday morning. After that time, the low is forecast to accelerate east-northeastward and merge with a trough of low pressure ending any further tropical development chance. Formation chance through 5 days…low…10 percent.

Have a fantastic Friday!!!
Ryan