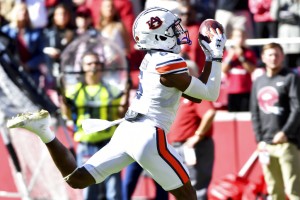 Bo Nix threw for 292 yards and a pair of touchdowns and ran for  score to lead Auburn to a 38-23 win over No. 17 Arkansas, the Tigers’ sixth straight in the series.

Marcus Harris recovered a fumble in the end zone for Auburn in the third quarter to give the Tigers a lead after a strip sack by Derick Hall of Arkansas quarterback KJ Jefferson.

Then Harris stuffed Jefferson on a fourth down and one play later Nix hooked up with Demetris Robertson for a 71-yard touchdown as Auburn turned a three-point deficit into an 11-point lead in three minutes.

After a bye week, Auburn will host Ole Miss on October 30.