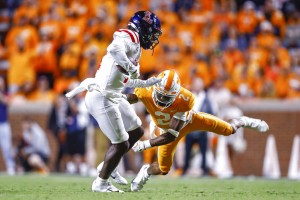 No. 13 Ole Miss held off Tennessee 31-26 Saturday night after Rebels coach Lane Kiffin avoided being by hit by golf balls as Volunteers fans pelted the field with objects in the chaotic final minutes.

Ole Miss stopped Tennessee a yard shy of a first down on a fourth-and-24 pass with just over a minute left. After that play, and the review that confirmed the spot of the ball, Tennessee fans pelted the field with objects, including water bottles, beer cans and a mustard bottle.

Tennessee’s cheerleaders, dance team and band were ordered out of the stadium and police cleared the student section.

Play resumed after about a 20-minute delay.  UT was able to get the ball back for a final drive to possibly win the game.

But UT quarterback Hendon Hooker went down with an injury after converting a first down. Joe Milton entered as his replacement but was unable to put the ball in the end zone. On the final play of the game, Milton attempted to run into the end zone as the clock ran out, but ran out of bounds short of the goal line.

Kiffin took the golf ball with him off the field and threw his visor into the stands on his way into the tunnel after catching a water bottle thrown at his head as UT fans continued throwing objects after the game.

Tennessee’s quarterback situation is unknown as they prepare for a trip to face Alabama Saturday night.