Tua Tagovailoa Returns to Dolphins, But Miami Loses to Jacksonville in London 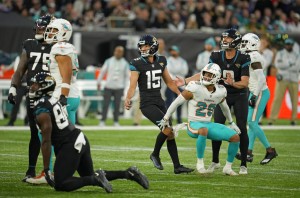 Jacksonville Jaguars kicker Matthew Wright (15), center, looks up as he kicks a field goal to win the match during the second half of an NFL football game between the Miami Dolphins and the Jacksonville Jaguars at the Tottenham Hotspur stadium in London, England, Sunday, Oct. 17, 2021. (AP Photo/Matt Dunhan)

Quarterback Tua Tagovailoa returned to the field for the Miami Dolphins after his rib injury, but despite going 33-for-47 for 329 yards with two touchdowns and one interception, his comeback ended with a 23-20 loss to the Jacksonville Jaguars.

The game was played at Tottenham Hotspur Stadium in London.

Lawrence threw for 319 yards and a touchdown.