Trash being thrown onto the field at the Ole Miss-Tennessee game at Neyland Stadium in Knoxville, TN on Saturday, Oct. 16, 2021

The Southeastern Conference has fined the University of Tennessee $250,000 after fans threw so much trash onto the field that the game had to be delayed for about 20 minutes in the fourth quarter.

UT fans were upset about the spot of the ball as Tennessee attempted to convert a fourth-and-24 into a first down. The ball was spotted just short of the first down, prompting fans to throw water bottles, beer cans, a mustard bottle and pizza boxes. Kiffin was hit with a golf ball.

Ole Miss Coach Lane Kiffin being hit with golf ball thrown from the stands at the Ole Miss-Tennessee game in Knoxville, TN on October 16, 2021

UT’s own cheerleaders and dance team were hit with debris and taken off the sidelines. The UT band was removed from the stands.

The SEC made it clear shortly after the game that action would be taken.

“The disruption of Saturday night’s game is unacceptable and cannot be repeated on any SEC campus,” SEC Commissioner Greg Sankey said in a statement. “Today’s actions are consistent with the oversight assigned by the membership to the SEC office, including the financial penalty and review of alcohol availability. We will use this opportunity to reemphasize to each SEC member the importance of providing a safe environment even with the intensity of competition that occurs every week. We will also reengage our membership in further review of the alcohol availability policy to consider additional measures for the sale and management of alcohol while providing the appropriate environment for collegiate competition.” 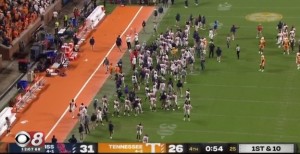 Ole Miss team being moved onto the field and away from the sidelines to avoid being hit with trash being thrown at Neyland Stadium in Knoxville, TN on October 16, 2021

Here is an outline of the punishment that Tennessee faces:

The SEC says it’s not suspending alcohol sales privileges for the University of Tennessee but reserves the right to do so if other requirements outlined above are not met.