Braves Win Game One of World Series Behind Soler Homer 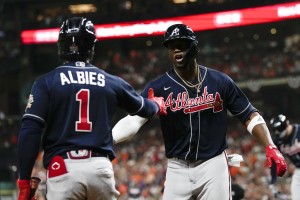 Atlanta Braves’ Jorge Soler celebrates with Ozzie Albies after a home run during the first inning of Game 1 in baseball’s World Series between the Houston Astros and the Atlanta Braves Tuesday, Oct. 26, 2021, in Houston. (AP Photo/Ashley Landis)

Making his first start since testing positive for COVID-19, Jorge Soler became the first player to begin a World Series with a home run and the Atlanta Braves, despite the loss of pitcher Charlie Morton to a broken leg, hushed the Houston Astros 6-2 in Game 1.

Boosted by a strong bullpen effort, a two-run homer by Adam Duvall and a late sacrifice fly from Freddie Freeman, the Braves coasted in their first Series appearance since Chipper Jones and the Big Three aces ascended in 1999.

Jose Altuve, Carlos Correa and the Astros mostly looked lost at the plate. This is their third World Series in five seasons — and first since their illegal sign-stealing scheme was revealed.