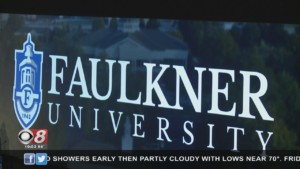 Faulkner University has announced that President Mike Williams will be stepping down on May 6, 2022, to take a president’s position at another university.

Williams is scheduled to become president of Harding University in Searcy, Arkansas, on June 1, 2022.

He is the eighth president in Faulkner University’s 79-year history.

According to a statement from the university, Williams’ letter of resignation read in part, “Last night I accepted the offer to become the 6th president of Harding University. This decision has essentially ripped Lisa and me apart emotionally. We dearly love the people here at Faulkner. We love her mission. We love the vision we have cast for the future. We know God has blessed her heritage and He will shepherd her future.”

Williams came to Faulkner in 2015. According to the university, under his watch, Faulkner has grown to include a new College of Health Sciences, which acts as the foundation for Williams’ vision to create an autism center on campus. He has also been mission-driven since coming to Faulkner to help the community and has helped impress that vision on staff and students by partnering with Davis Elementary School and HEAL Alabama.

Before coming to Faulkner, Williams was at Harding for 28 years. During his time at Harding, Williams served as the director of admissions, assistant vice president of enrollment services and as the vice president of advancement. Williams received both his bachelor and master of business administration from Harding.

The search for Faulkner’s next president will begin immediately. A special session of the Board of Trustees will convene October 28 to create a search committee.