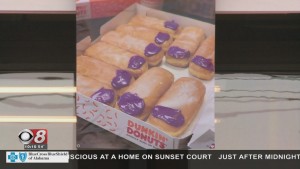 Rotary Clubs throughout Alabama and three other states, with the help of Dunkin’, have raised more than $1.3 million in an effort to eradicate polio worldwide.

The money was raised through the Purple Pinkie Project. Dunkin’ donated doughnuts to Rotary Clubs in Alabama, Florida, Missouri and Tennessee for the fundraiser. Rotary Club members covered one end of the doughnuts with purple icing. That is to represent children in other countries who get purple ink put on their pinkie finger to show that they have received the polio vaccine.

More than 70,000 doughnuts were donated, allowing all proceeds from sales to benefit Rotary International’s End Polio Now campaign. The project was launched in Tennessee in 2018 before expanding to Alabama and other states. Since the start of the project, more than $3 million has been raised.

In our area, 1,684 boxes of doughnuts were delivered to Rotary Clubs in Montgomery, Dothan and Mobile to be sold for $25. Thanks to matching contributions, every $25 box turned into a $187.50 contribution to the World Polio Fund.

While polio is no longer a threat in the U.S., it remains endemic in Afghanistan and Pakistan. Children there get a vaccine through drops in the mouth, allowing for millions to be vaccinated in a short period of time. That’s why their pinkie finger gets the purple ink, so that vaccinators can quickly see who has received this potentially lifesaving medicine and who hasn’t.

Rotary International says it is committed to raising $50 million a year to be matched 2-to-1 by the Bill & Melinda Gates Foundation, yielding $150 million for polio eradication activities every year. To date, Rotary has contributed more than $2.1 billion to fight the disease, including matching funds from the Gates Foundation.

It’s still crucial to work to keep other countries polio-free. If all eradication efforts stopped today, within 10 years, polio could paralyze as many as 200,000 children each year. But as long as a single child has polio, all children are at risk.