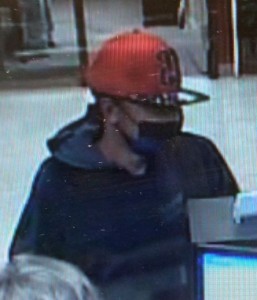 Eclectic police say that Trustmark Bank was robbed at around 9:20 a.m.

Police Chief Robert Head says an unknown male entered the bank on 15 Kowaliga Road and handed a note to one of the tellers.  The note stated he was robbing the bank.

The suspect left the bank on foot with an amount of cash estimated at around $2,000 or more.

The witnesses described the suspect as being a black male, 5’06” in height and weighing approximately 130-140 lbs.  He was wearing a red hat with a gold number “23” on the front, a black and blue face mask, black or navy-blue hood jacket, black pants and black shoes.

If you have any information regarding the identity of this suspect or his whereabouts, call Central Alabama CrimeStoppers at (334) 215-STOP.