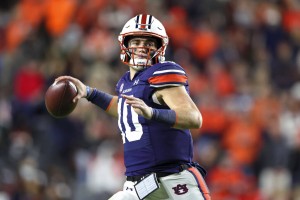 Auburn quarterback Bo Nix (10) looks for a receiver during the first half of the team’s NCAA college football game against Mississippi on Saturday, Oct. 30, 2021 in Auburn, Ala. (AP Photo/Butch Dill)

Auburn quarterback Bo Nix passed for 276 yards and a touchdown and ran for two more scores and No. 18 Auburn’s defense made a number of big stops in a 31-20 victory over 10th-ranked Mississippi on Saturday night.

The Tigers remains the top challenger to No. 3 Alabama in the SEC’s Western Division with Nix winning a quarterback duel with Heisman candidate Matt Corral. Corral injured his ankle early in the game, but was able to return to the game. 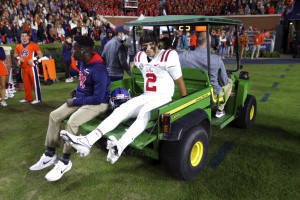 Mississippi quarterback Matt Corral (2) is taken off the field on a cart after an injury during the first half of the team’s NCAA college football game against Auburn on Saturday, Oct. 30, 2021 in Auburn, Ala. (AP Photo/Butch Dill)

The Rebels had their three-game win streak end after squandering four second-half scoring chances, three with failed fourth down passes in field goal range. Plus Jaylin Simpson intercepted a pass in the end zone midway through the fourth.

Auburn’s next game is at Texas A&M Saturday, Nov. 6.