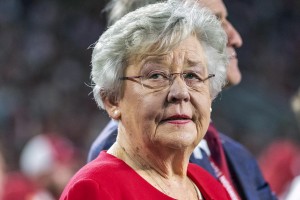 Gov. Kay Ivey has announced that she has joined a lawsuit to fight federal COVID-19 vaccine mandates.

Saturday, she released this statement:

“I have joined a lawsuit to fight back against the outrageous, overreaching Biden vaccine mandates. From the moment the White House tried to force this vaccine on to Americans, I have said that Alabama is standing strong against it and that the best way to stop this is to go to the courts. I am proud to take this important step and join Georgia and other states to pursue the most effective legal path to stop this vaccine mandate dead in its tracks. Alabamians are overwhelmingly against these egregious, overreaching federal mandates, and I stand firmly with them.”

Alabama Attorney General Steve Marshall announced Friday that Alabama would file suit against the mandates that involve federal contractors. Many other states have done the same.

Those mandates are what caused the University of Alabama System and Auburn University to impose a requirement for all employees on all campuses to be vaccinated by Dec. 8 or possibly be fired.

ADPH: COVID-19 Cases in Alabama Schools Fall to Near 400

WATCH: Biden Says New COVID-19 Variant a Cause for Concern, Not Panic