October was Breast Cancer Awareness month and many organizations raised donations for the fight against breast cancer. ‘Real Men Wear Pink’ had their wrap up celebration party Tuesday night at the Common Bond brewery.

‘Real Men Wear Pink’ are a group of 30 men who have raised donations for the American Cancer Society toward saving lives against breast cancer. For 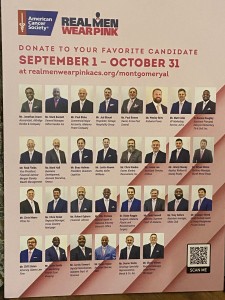 the last 2 months, the members have been raising money with their own creative fundraising events. They have raised over $150,000 and are still receiving donations.

One of the members, Blake Raggio, even raised over $40,000, which earned him the winning spot in the group.

“Our main event was the Botox for Breast Cancer event,” stated Raggio. “So, with the help of Dr. Cawthon and Dr. John Bower, we were able to raise over 40 thousand dollars.”

The Senior Development Manager for the American Cancer Society, Margen Gadd, was extremely thankful for everyone involved in raising the donations.

“It’s so heartfelt what this campaign does because the funds are restricted to breast cancer research and the funds that we do; so funding for mammograms and all the other services that ACS provides to help women,” stated Gadd.

‘Real Men Wear Pink’ are accepting nominations for ambassadors who will be selected by the American Cancer Society Committee.

Nominations for ambassadors and for donations are available on the American Cancer Society website.