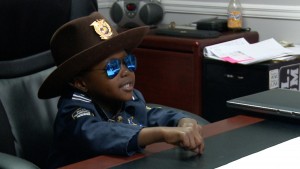 “He wanted to be a sheriff for Halloween but he was admitted into ICU. He has Rhabdomyosarcoma which means cancer of the muscles and his is located in the bladder,” said Savage.

When Sheriff Mike Granthum heard about Ashton — and what he was going through, he brought Ashton up to the sheriff’s office — and made him sheriff for a day.

“Just to see him knowing what he’s gone through just to take a breath every day, something that we take for granted. To him, we’re super heroes. And if we can put a smile on his face with all he’s gone through. We’re going to do our best to do it,” said Granthum.

Ashton toured the sheriff’s office. And even got to ride in a squad car.

“He has a sheriff’s uniform that’s in the washer cause we wear it like every other day. He has the police officer that he has on today. And he has a SWAT uniform as well,” said Savage.

And of course all of us here at Alabama News Network — wish Ashton and his family — all the very best.