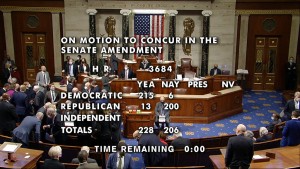 In this image from House Television, the vote total of 228-206 is displayed late Friday, Nov. 5, 2021, in Washington, as the House approves a $1 trillion package of road and other infrastructure projects after Democrats resolved a months-long standoff between progressives and moderates, notching a victory that President Joe Biden and his party had become increasingly anxious to claim. (House Television via AP)

President Joe Biden is hailing Congress’ passage of his $1 trillion infrastructure package as a “monumental step forward for the nation.”

This, after fractious fellow Democrats resolved a months-long standoff in their ranks to finally seal the deal.

The package is a historic investment by any measure, one that Biden compares in its breadth to the building of the interstate highway system in the last century or the transcontinental railroad the century before.

Approval of the bill sends it to the desk of a president whose approval ratings have dropped and whose party got a cold shoulder from voters in this past week’s off-year elections.