No. 3 Alabama Survives Against Underdog LSU to Win 20-14 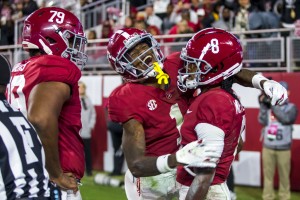 Bryce Young passed for 302 yards and No. 3 Alabama’s defense came up with enough big plays for a 20-14 victory over heavy underdog LSU Saturday night.

Alabama was a more than four-touchdown favorite heading into the game. The Crimson Tide is second in the initial College Football Playoff rankings that were released earlier this week.

But the Crimson Tide preserved their national championship hopes in a game that was as tight as some meetings when both teams were nursing such ambitions.

The injury-depleted Tigers and lame-duck coach Ed Orgeron didn’t act like 29.5-point underdogs. It wasn’t over until the final play, a Hail Mary that fell incomplete in the end zone. The Tigers came up empty in three fourth-quarter trips into Alabama territory.

Alabama’s next game is against New Mexico State at Bryant-Denny Stadium next Saturday at 11AM CST.

(Copyright 2021 The Associated Press contributed to this report All rights reserved. This material may not be published, broadcast, rewritten or redistributed without permission.)