People in the Selma-Dallas County area paid tribute to those who have served in our nation’s military — during the annual Veterans Day ceremony Thursday at Memorial Stadium.

The event let’s area veterans know that their contributions to protect and preserve the rights of every American citizen — are appreciated. 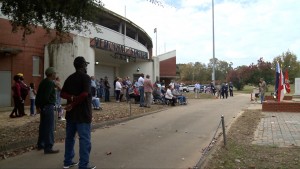 “The American soldier we pretty much go to war and we fight the fights to where we as Americans and as civilians you know, we can live day by day,” said veteran Mark Boswell.

“I didn’t coin the phrase but I’ve often heard it stated that freedom is not free. It actually paid for with blood, sweat, tears,” said Selma Mayor James Perkins.

A diverse crowd of people came out to the ceremony — to honor that service. Black — white — young — and old — were all in attendance.

“Showing that we appreciate them and all the work that they have done to serve this country.” 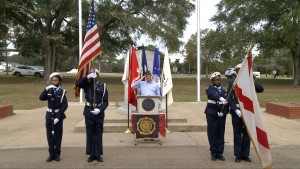 “It’s paying tribute to all the veterans throughout the world and our country,” said South Side High School JROTC Instructor Alex Medina.

“Because without the military we wouldn’t have these freedoms that we have now.”

Brown says his military service instilled an appreciation for diversity in him.

“I think back to, I go into basic training where there’s 120 guys. It was good to see the differences in our country. But at the end of those six months, we were together. We were one. And to know that, man we all need each other. And we’re better together,” said Brown.