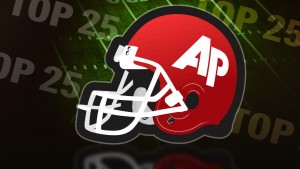 Alabama jumped Cincinnati to No. 2 behind Georgia. The switch from Cincinnati at No. 2 to Alabama was more about the Bearcats than the Crimson Tide, which closed the gap on UC to four points last week. Cincinnati remained unbeaten after winning at USF 45-28, but it was the fourth straight week the Bearcats played a team with a losing record and found themselves in a competitive game in the second half.

Meanwhile, Alabama had no issues with its 59-3 victory over New Mexico State.

Auburn had been ranked No. 16, but fell out of the polls after its 43-34 loss to Mississippi State, blowing what had been a 25-point lead.

Elsewhere, Oklahoma dropped eight spots to No. 12 after losing for the first time this season. Georgia was a unanimous No. 1 for the sixth straight week and the Southeastern Conference has the top two teams in the poll for the sixth time this season with Georgia and Alabama at No. 1 and No. 2.

The SEC has five teams in this week’s poll. Besides Georgia and Alabama, Ole Miss is No. 10, Texas A&M is No. 16 and Arkansas returns to the poll at No.21.