Old Bridge Rediscovered in Selma Could Get New Life

The old Hatfield Bridge connected downtown Selma — to the west side of town.

“It used to be the only way you could get across Valley Creek on this side down here, said Selma resident Earl Edwards.

The old iron bridge sat out of sight and out of mind for decades. Until a group of volunteers re-discovered the old relic last week. Then cut back all the trees and overgrowth that had swallowed it up. 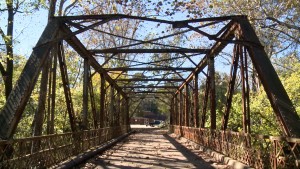 “But what happened is you could see the top, the very top of the bridge. You knew something was back here.”

“I was amazed cause I though the bridge was gone. I was amazed that it’s still here,” said Anthony Smith.

The discovery has brought back — some cherished childhood memories — for a lot of people.

“A lot people used to walk upside the creek and everything. And the creek, it was shallow enough for you to wade in,” said Edwards.

“Back in those 70’s — kids like me, what we would do is we would go beneath the bridge. We would go under there and swim,” said Anthony Smith.

Now the group hopes to turn the site into a recreational green space.

“It’s very peaceful to stand on the bridge, to stand off the side of the bridge. I think it’ll be remarkable to have a walking trail here,” said McGhee.

“I think it’s a good thing to do. It would be a peaceful place for people to come see in Selma, one more thing.”

The Hatfield Bridge was replaced by the bridge on Cahaba Road.