No. 2 Alabama Could Clinch SEC West with Victory Over No. 21 Arkansas 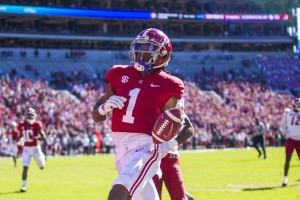 Alabama wide receiver Jameson Williams (1) scores on a pass reception against New Mexico State during the first half of an NCAA college football game, Saturday, Nov. 13, 2021, in Tuscaloosa, Ala. (AP Photo/Vasha Hunt)

No. 2 Alabama hosts 21st-ranked Arkansas trying to secure a spot in the SEC championship game versus top-ranked Georgia.

The Crimson Tide have won the past 14 meetings, but face a Razorbacks team that has won three straight games.

Crimson Tide quarterback Bryce Young is one of the leading Heisman Trophy candidates while the Razorbacks’ K.J. Jefferson is a threat both running and passing.

Alabama has the national sack leader in linebacker Will Anderson Jr.