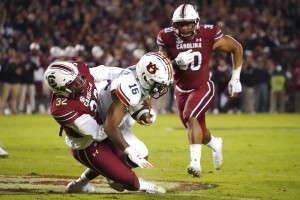 Auburn has now lost three games in a row after losing to South Carolina in Columbia Saturday night, 21-17.

Auburn had an early 14-0 lead, but for the second straight game, the Tigers dominated early just to see its lead evaporate.  Auburn was without injured starting quarterback Bo Nix and kicker Anders Carlson.

In his first start, quarterback T. J. Finley completed 17 of 32 passes for 188 yards and one touchdown.

The game was a faceoff between first-year head coaches Bryan Harsin of Auburn and Shane Beamer of South Carolina.