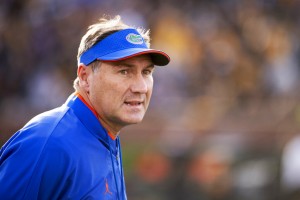 The University of Florida has fired head football coach Dan Mullen. The Gators have fallen to 2-6 in SEC play this season, the team’s worst performance since 1979.

The Gators collapsed this season after going to the SEC Championship Game last year. The firing comes a day after his sixth loss in nine games.

The high point for this season happened when Florida nearly upset then-No. 1 Alabama in September . Since then, the Gators have lost at Kentucky, at LSU, at South Carolina and at Missouri, while also losing 34-7 to top-ranked Georgia.

The Gators’ lone win since early October came 70-52 against Samford, a game in which Florida allowed a program-record 42 points in the first half.

Mullen arrived in Gainesville in 2018 after leading Mississippi State to its best stretch in program history from 2009-17, going 69-49 with eight straight bowl appearances. Mullen had previously been the  Gators’ offensive coordinator under coach Urban Meyer who helped win the program’s last two national championships in 2006 and 2008.

The Gators will pay Mullen a $12 million buyout.

(Copyright 2021 The Associated Press. contributed to this report All rights reserved. This material may not be published, broadcast, rewritten or redistributed without permission.)

Vision of Hamlin, Jordan comes into focus with win at Kansas