From the West Alabama Newsroom –The city of Marion and its employees are breathing a sigh of relief after narrowly averting a Thanksgiving holiday catastrophe.

Mayor Dexter Hinton says the city was notified Monday that the IRS had put a levy on the city’s bank accounts. And frozen the accounts. 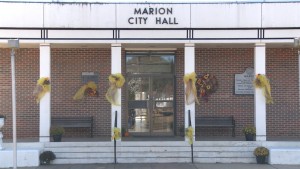 “If they’re frozen you can’t use them,” said Hinton.

And as a consequence, city officials would not have been able to pay bills or make payroll.

“That’s prior to my administration. And I hate that we’re having to take care of old issues. And we’re going to get it taken care of in a timely fashion. We’re going to work as hard as we possibly can to make sure that our citizens are taken care of, our employees,” he said.

Hinton says the levy was removed Tuesday afternoon after the city was able to rectify some issues with the IRS.

And a good thing it got resolved so quickly. Because Wednesday is payday.