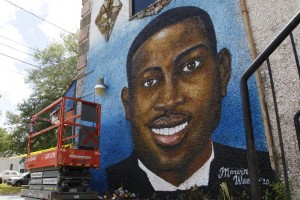 FILE – A painted mural of Ahmaud Arbery is displayed on May 17, 2020, in Brunswick, Ga., where the 25-year-old man was shot and killed in February. Arbery was shot and killed by two men who told police they thought he was a burglar. (AP Photo/Sarah Blake Morgan, file)

All three white men charged in the death of Ahmaud Arbery in Georgia have been convicted of murder in the fatal shooting that became part of a larger national reckoning on racial injustice.

The convictions for Greg McMichael, son Travis McMichael and neighbor William “Roddie” Bryan came after jurors in Brunswick, Georgia, deliberated for about 10 hours.

The men face minimum sentences of life in prison. It is up to the judge to decide whether that comes with or without the possibility of parole.