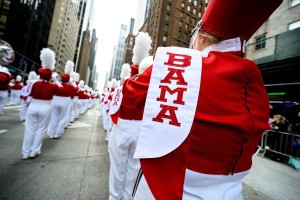 The University of Alabama’s Million Dollar Band made its first appearance in the Macy’s Thanksgiving Day Parade in New York City.

The Tuscaloosa News reports that the band was scheduled to play “Santa Claus is Coming to Town” and escort Santa in his parade-ending float.

The Million Dollar Band was one of just two collegiate bands chosen. It will mark the first Macy’s parade appearance for the band, which was founded in 1912.