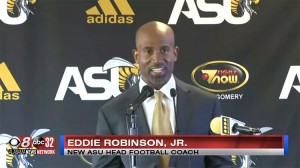 Alabama State University has selected a former player as its next head football coach. Eddie Robinson, Jr. was introduced as a news conference on Friday morning.

Robinson replaces Donald Hill-Eley, who was let go after five seasons and a 20-21 record.

Robinson becomes the 30th head coach in the Hornets history. He takes over a program that finished 5-6 this season with all five of its wins coming at ASU Stadium.

The former Alabama State and NFL star returns to his alma mater where he was a stellar student-athlete both on and off the field. Robinson earned All-SWAC honors and was named the SWAC Defensive Player of the Year twice — 1990 and 1991 — and was named a two-time Sheridan Broadcasting Network All-American. Robinson also earned national Defensive Player of the Year honors after helping lead the Hornets to the 1991 HBCU National Championship.

Robinson was recognized as the Toyota Leadership Award recipient in 1990.

“I am excited to announce Eddie Robinson, Jr. as Alabama State University’s next Head Football Coach,” Alabama State Director of Intercollegiate Athletics Dr. Jason Cable said. “Coach Robinson is a true Hornet that possesses more than 30-plus years of experience at various levels of football. He is a stellar man of vision who has a proven record of success. Coach Robinson intrinsically understands the importance of restoring the winning tradition at ASU. His elite playing experience, leadership capabilities, and his ability to assemble an experienced staff are attributes that will contribute to the next era of success at ‘Bama State.”

In 1998, Robinson became the youngest member of the Southwestern Athletic Conference (SWAC) Hall of Fame at just 28 years old, and in 2012, he was recognized as a MEAC/SWAC Challenge Legend.

With more than 30-plus years of football experience at various levels, Robinson served as a college football analyst for Fox Sports South, ESPNU, ESPN3 and Comcast Sports South from 2005 to 2014.

“I want to commend Athletic Director Jason Cable for moving swiftly to hire a new head coach,” said President Quinton T. Ross, Jr. “I served as SGA President when Robinson was a scholar-athlete, and saw firsthand his commitment both to athletics and to academics, which propelled him to national prominence as a player in the NFL. Throughout his career and after, he has remained loyal to and engaged with his alma mater. I ask that all of Hornet Nation support alumnus Robinson as he takes the helm of Hornets football. We must all remain focused on and committed to our goal of excellence in every aspect of the University, including ASU athletics.”

Cable said ASU had considered 20 candidates for the position. He said Robinson had a vision that aligned most closely with that of the administration in terms of both athletics and academics.

Robinson said at the news conference that his goal is to win the SWAC Championship in 2022.