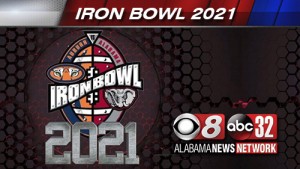 The 2021 Iron Bowl won’t decide the SEC West as had been predicted a few weeks ago, but both No. 3 Alabama and unranked Auburn still have plenty on the line.

Alabama (10-1, 6-1 SEC) hopes to keep its playoff hopes on track. Alabama hasn’t won at Jordan-Hare Stadium since 2015, but it is a nearly three-touchdown favorite. The Crimson Tide has already clinched the SEC West and will play top-ranked Georgia in the SEC Championship Game in Atlanta on Dec. 4.

Auburn head coach Bryan Harsin will be leading the Tigers in his first Iron Bowl. Auburn (6-5, 3-4 SEC) will be looking for an upset, playing without starting quarterback Bo Nix who is recovering from ankle surgery. Auburn has lost three games in a row, which ruined its chances to win the SEC West.