New Memorial to Rosa Parks to Be Dedicated in Montgomery 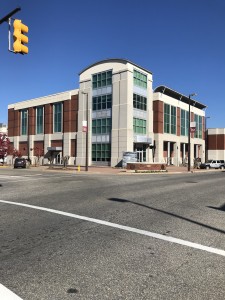 The new Rosa Parks Memorial, seen in the center of this photo of the Rosa Parks Museum, will be unveiled and dedicated on December 1, 2021, in Montgomery – Alabama News Network

A new memorial to Rosa Parks will be dedicated in Montgomery on Wednesday, Dec. 1., which is Rosa Parks Day.

The memorial will depict the Alabama seamstress near the spot where she was arrested for refusing to give up her bus seat to a white man in 1955. It will be unveiled and dedicated at a ceremony at 11:30 a.m. in front of the Rosa Parks Museum.

Parks gained worldwide fame upon her arrest on Dec. 1, 1955, which led to the Montgomery Bus Boycott. It lasted from December 5, 1955 to December 20, 1956, and ended with the U.S. Supreme Court ruling that segregation on public buses was unconstitutional.