A special anniversary was celebrated nationwide among U.S. Air Force members. A local civil air patrol squadron held their anniversary event in the City of Wetumpka. 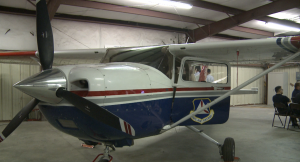 The Civil Air Patrol organization was founded in 1941 by a group of pilots and aviation enthusiasts who wanted to donate their time and aircraft to protect the nation during World War II.

The national Civil Air Patrol is headquartered at Maxwell Air Force Base, where it was founded.

The celebration was held at the Crowder Training Facility at the Wetumpka Municpal Airport and had the Headquarters South Group, Coosa River Flight, and Maxwell Composite Squadron of Alabama Wing observe the anniversary.

When asked about what this anniversary means, Chief of Staff of Headquarters South Group Lt Col Patricia Coghlan compared the Pandemic to when the organization was founded.

“It affected the entire world much like things that we’re happening back in 1941 affected the whole world,” stated Lt Col Coghlan. “It affected people personally and I think that they realized the importance of the organization and what the people before them did and now 80 years from now they’ll look back at the things they’re doing and people will be celebrating that as well.”

Among the events, Headquarters South Group also held their Change of Command ceremony.