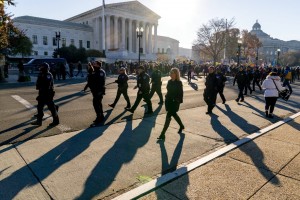 Police officers walk along the road where abortion rights advocates and anti-abortion protesters demonstrate in front of the U.S. Supreme Court, Wednesday, Dec. 1, 2021, in Washington, as the court hears arguments in a case from Mississippi, where a 2018 law would ban abortions after 15 weeks of pregnancy, well before viability. (AP Photo/Andrew Harnik)

The Supreme Court’s conservative majority is signaling it will uphold Mississippi’s 15-week ban on abortion and may go much further to overturn the nationwide right to abortion that has existed for nearly 50 years.

After nearly two hours of arguments on Wednesday, all six conservative justices, including three appointed by former President Donald Trump, indicated they would uphold the Mississippi law.

A decision is expected at the end of next June.