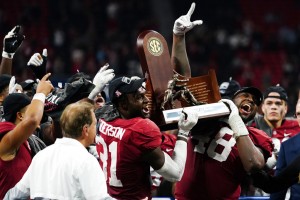 Bryce Young stunningly carved up the nation’s best defense, giving Nick Saban and Alabama a shot at another national championship.

Young threw for three touchdowns and ran for another Saturday as the fourth-ranked Crimson Tide rolled over No. 1 Georgia 41-24 in the Southeastern Conference championship game.

The result that likely sends both powerhouse programs to the four-team playoff, which will be announced Sunday.

Georgia cruised through the regular season with a 12-0 record, barely challenged and a unanimous choice as the nation’s No. 1 team for the past two months. But the Bulldogs were blown away by Young’s wizardry.