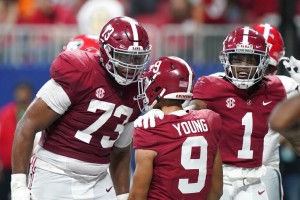 Alabama’s blockers went from being bullied to dominant in the span of a week.

The fourth-ranked Crimson Tide’s offensive line rose to the occasion against No. 1 Georgia’s heralded defensive front in a 41-24 Southeastern Conference Championship game victory on Saturday that sealed a playoff spot for Alabama.

It was a marked turnaround for a team that gave up seven sacks against a lesser defense at Auburn last weekend and took more than 59 minutes to score its first touchdown before winning 24-22 in quadruple overtime.

It was also a resounding response in a matchup that appeared to favor the Bulldogs.