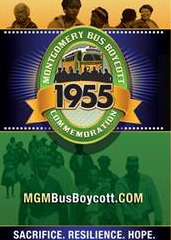 in honor and to remember all of the brave foot soldiers who fought for their freedom that continues to carry on today. Bishop J. Drew Sheard was one of the guest speakers at the free event.

The Director of Cultural Affairs for the City of Montgomery, Yvette Jones-Smedley, had this to say about Bishop Sheard’s presence for the anniversary.

“The young people coming by will have an opportunity to listen to Bishop Sheard,” stated Jones-Smedley. “When he will be sharing what the role of the church is today and communities because we know what the role was 66 years ago, but sometimes the young people think it’s maybe not so relevant, this body of worshipers, and he’s going to set us straight. Put us on the straight and narrow and the path for the growth for the future.”

The ceremony was part of a week long celebration for Montgomery Civil Rights pioneers.