CBS and the Recording Academy® announced today that Trevor Noah, Comedy Central’s Emmy® Award-winning “The Daily Show” host and comedian, will return as master of ceremonies of THE 64TH ANNUAL GRAMMY AWARDS. Music’s Biggest Night® will be broadcast live from Crypto.com Arena (currently STAPLES Center) in Los Angeles Monday, Jan. 31, 2022 at 7PM on the CBS Television Network, and will be available to stream live and on demand on Paramount+*. Previously, Noah hosted “The 63rd Annual GRAMMY Awards.”

“Trevor brought his trademark talent and versatility to last March’s GRAMMYs®, and we can’t wait for him to host the event on CBS and Paramount+ again this year,” said George Cheeks, President and CEO, CBS and Chief Content Officer, News & Sports, Paramount+.

“Trevor was amazing as our host for the 63rd GRAMMY Awards with praise from the music community, music fans and critics,” said Harvey Mason Jr., CEO of the Recording Academy. “We’re so excited to welcome Trevor back to the GRAMMYs stage and feel fortunate to once again have him hosting what we believe will be an unforgettable evening.”

Last week, THE 64TH ANNUAL GRAMMY AWARDS nominees were revealed, and it was announced that, for the first time, there are 10 nominees in each of the general field categories: Record Of The Year, Album Of The Year, Song Of The Year, and Best New Artist. This year’s top nominees include Jon Batiste (11), Justin Bieber (8), Doja Cat (8), H.E.R. (8), Billie Eilish (7) and Olivia Rodrigo (7). As the only peer-selected music accolade, the GRAMMY Awards are voted on by the Recording Academy’s voting membership body of music makers, who represent all genres and creative disciplines, including recording artists, songwriters, producers, mixers and engineers. 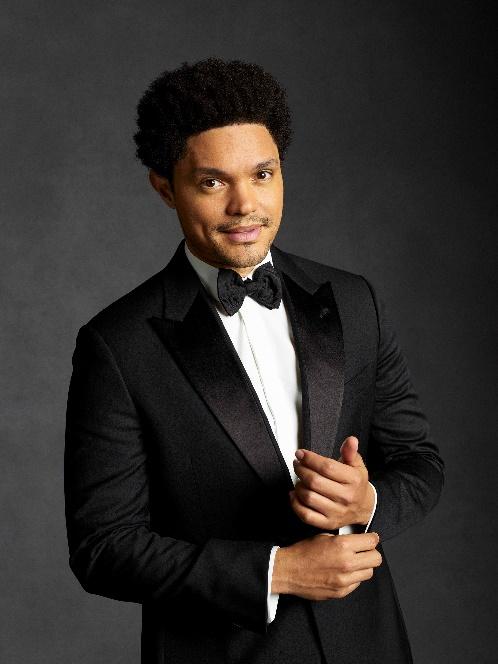 Trevor Noah is the most successful comedian in Africa and is the host of the Emmy® Award-winning “The Daily Show” on Comedy Central. “The Daily Show with Trevor Noah” has broken free from the restraints of a 30-minute linear show, producing engaging social content, award-winning digital series, podcasts and more for its global audience. “The Daily Show with Trevor Noah” has received numerous Emmy Award nominations, including Outstanding Variety Talk Series and Outstanding Writing for A Variety Series, and a People’s Choice Award nomination for the Nighttime Talk Show of 2021.

Trevor has written, produced and starred in 11 comedy specials, including his most recent, “Trevor Noah: Son of Patricia,” which received a NAACP Image Award for Outstanding Variety Show, as well as a GRAMMY® Award nomination for Best Comedy Album.

Trevor is the author of the #1 New York Times bestseller Born a Crime: Stories from a South African Childhood, which has received the Thurber Prize for American Humor and two NAACP Image Awards. The Audible edition of Born a Crime, performed by Trevor, remains one of the top-selling, highest-rated, and most-commented-on Audible performances of all time. To date, Born a Crime has sold over two million copies across all formats.

In 2019, Trevor launched a podcast series, “The Trevor Noah Podcast.” Trevor challenges himself – and all his listeners – to explore unfamiliar angles, embrace differing viewpoints, and celebrate the contradictions that make the modern world both bewildering and exciting. The podcast won the Webby Award and Webby People’s Voice Award for News & Politics.

In April 2018, Noah launched the Trevor Noah Foundation, a youth development initiative that empowers youth with the foundation for a better life: access to high-quality education. Noah’s vision is a world where an education enables youth to dream, see and build the impossible.

About the Recording Academy

The Recording Academy represents the voices of performers, songwriters, producers, engineers, and all music professionals. Dedicated to ensuring the recording arts remain a thriving part of our shared cultural heritage, the Academy honors music’s history while investing in its future through the GRAMMY Museum®, advocates on behalf of music creators, supports music people in times of need through MusiCares®, and celebrates artistic excellence through the GRAMMY Awards – music’s only peer-recognized accolade and highest achievement. As the world’s leading society of music professionals, we work year-round to foster a more inspiring world for creators.