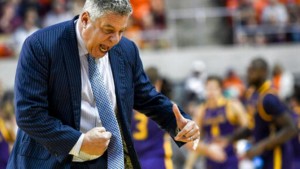 The NCAA has announced that Auburn basketball coach Bruce Pearl will be suspended for two games, and the program will be on probation for four years after an investigation.

The punishment is in connection with violations committed by former assistant coaches.

Auburn self-imposed a postseason ban last season, and the NCAA is honoring that penalty as part of its punishment.

CBS Sports reports the absence of an additional postseason ban and a relatively short suspension for Pearl is good news for Auburn, which has maintained that Pearl was not directly involved in the scandal.

At the heart of the case is former Tigers assistant Chuck Person receiving bribes in exchange for his influence on players signing with certain financial advisors.

The case dates back to September 2017, when FBI agents arrested Person as part of a wide-ranging investigation into corruption in college basketball. Pearl will be suspended the next two games for the 18th-ranked Tigers starting Saturday against Nebraska in Atlanta.