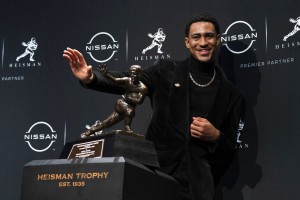 Bryce Young has become the first Alabama quarterback to win the Heisman Trophy. It is the top individual award in college football.

Young had a pair of Heisman moments late in the regular season. Against Auburn in the Iron Bowl, he led a 97-yard touchdown drive to send the game to overtime, which Alabama ultimately won. One week later, Young exploded for 421 yards passing and three touchdowns against Georgia to earn the No. 1 seed in the College Football Playoff.

Young ranked in the top five nationally with both 4,322 yards passing and 43 touchdowns to just four interceptions.