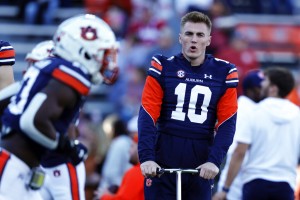 Auburn quarterback Bo Nix (10) watches as players warm up before the start of an NCAA college football game against Alabama Saturday, Nov. 27, 2021, in Auburn, Ala. (AP Photo/Butch Dill)

Auburn quarterback Bo Nix is in search of a new school after saying he’s entering the transfer portal.

The three-year starter said in a video posted to Instagram that he plans to leave Auburn as a graduate transfer. Nix didn’t name any potential destinations.

The former five-star recruit started the first 34 games of his career before a season-ending ankle injury against Mississippi State.

LSU transfer T.J. Finley started the final two games for the Tigers, who finished 6-6 and are set to face Houston in the Birmingham Bowl on Dec. 28.

Nix says the decision to leave was “the toughest” he’s ever made. His father, Patrick Nix, also played quarterback at Auburn.