It’s been close to a year since the historic St. James Hotel reopened in downtown Selma. So, how have things been going?

“It’s been good. I can truly say it’s been wonderful.”

St. James Hotel General Manager Cymethia Rudolph says the word is out about the historic hotel — and occupancy is up — and climbing.

“Through the week, it’s mostly tourists. And through the weekend we’re sold out. We probably started at 30 to 40 percent. Now we’re at 70 to 80 percent occupancy,” said Rudolph. 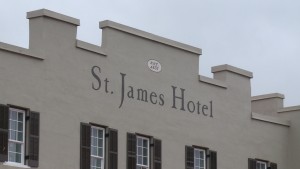 Clinton Burrell of Atlanta is guest at St. James this weekend. He says he’s visiting Selma — to experience the history.

“Me just wanting to understand my blackness more. And being down here I feel like I can get rich in black history,” said Burrell.

The historic hotel features a courtyard — a bar — and a full service restaurant. In addition to a grand patio and rooms on the riverfront.

“Can I get a river view room? That’s one of our number one sellers. And it is a beautiful site,” said Rudolph.

Ebonie Neely of Selma is the head of housekeeping at the historic hotel. She says the St. James offered an opportunity for a better job — and better pay.

“It’s a big help financially. It takes a big burden off you. As a single mother of three, like that’s, that’s huge. I’m very appreciative.”

The St. James Hotel was built in 1837. It’s one of the only surviving riverfront antebellum hotels in the Southeast.