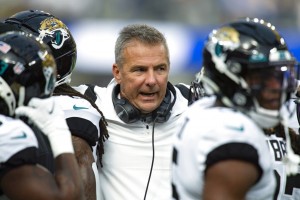 Urban Meyer’s tumultuous NFL tenure ended after just 13 games — and two victories — when the Jacksonville Jaguars fired him early Thursday because of an accumulation of missteps.

Owner Shad Khan made the move hours after ex-Jaguars player Josh Lambo told a Florida newspaper Meyer kicked him during practice in August.

It was the latest embarrassment for the three-time national championship-winning college coach who failed miserably to make the transition to the NFL.