GALA EVENT WILL AIR LIVE ON THE CW MONTGOMERY SUNDAY, JANUARY 9, 2022 at 6PM FROM THE FAIRMONT CENTURY PLAZA HOTEL IN CENTURY CITY, CALIFORNIA!

For the first time ever, the star-studded CRITICS CHOICE AWARDS will be simulcast live on The CW and TBS on Sunday, January 9, 7:00–10:00 p.m. ET (delayed PT – check local listings). The Critics Choice Awards are bestowed annually to honor the finest in cinematic and television achievement. Historically, they are the most accurate predictor of Academy Award® nominations. The 27th annual Critics Choice Awards show will be produced by Bob Bain Productions and Berlin Entertainment. The CCA is represented by Dan Black of Greenberg Traurig.

Very much looking forward to it!” “Ooooh! What a nice treat, I am so excited to be hosting the Critics Choice Awards with Taye!,” said Byer. “Oh, the gowns, the stars, the attention… on ME on a stage cohosting! I’m very
excited for all of it.”

“This is definitely going to be the best Critics Choice Awards show ever,” promised Critics
Choice Association CEO Joey Berlin. “Imagine Taye and Nicole up in front of a big, beautiful room full of all the biggest stars in film and television – all dressed to kill, drinking champagne and hoping to win. It’s going to be a blast!” 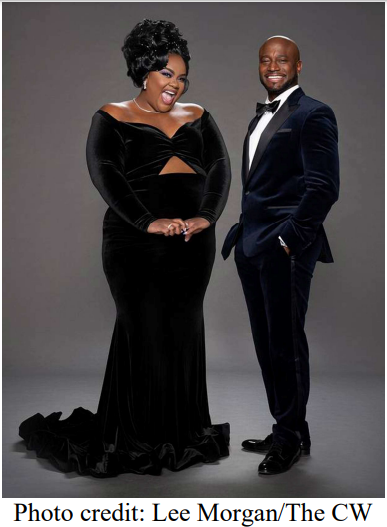 Taye Diggs is an established star of film, television and theatre, and made his feature film debut starring opposite Angela Bassett in the box office hit “How Stella Got Her Groove Back.”
Next, he will reprise his role of Harper Stewart in the newest rendition of the Best Man-franchise, “The Best Man: The Final Chapters.” The limited series will bring together the core cast and directorial team of the comedic hit franchise and is set to premiere on Peacock. Diggs currently stars in The CW’s hit drama “All American,” and recently executive produced and co-hosted “The Black Pack: We Three Kings” which aired on The CW, with a second variety special, “The Black Pack: Excellence,” also to air on The CW.

Nicole Byer is one of the most versatile voices in the comedy landscape today. An actress, comedian, writer, author and podcaster, she is perhaps most well-known as the host of Netflix’s Emmy® nominated competition baking series “Nailed It!,” which has gained a cult following of viewers since its premiere on the streaming platform in 2018. In 2020, Nicole made history by becoming the first Black woman ever to be nominated in the Emmy® category of “Outstanding Host for A Reality or Competition Program” and was nominated again in 2021. The series premiered its sixth season in September 2021.

About The CW:
THE CW TELEVISION NETWORK launched in 2006 as America’s fifth broadcast network, with programming targeting younger viewers, a demographic highly sought after by advertisers. The CW, a joint venture between Warner Bros. Entertainment and CBS Corporation, now broadcasts across the week, offering fourteen-hours of primetime programming, Monday through Sunday, beginning in Fall 2021. The CW’s primetime programming is also available to stream for free, without authentication, on the ad supported CWTV.com and The CW app, now available on every major OTT platform. Additionally, The CW broadcasts a three-hour Saturday morning kids block. The CW’s digital network CW Seed launched in 2013 and offers original short-form digital content as well as past seasons of fan-favorite television series. For more information about the network and its programming, visit www.cwtvpr.com.