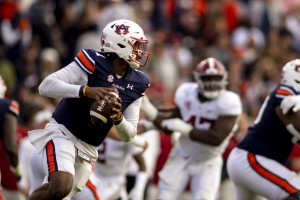 Auburn quarterback TJ Finley (1) rolls away from pressure during the first half of an NCAA college football game against Alabama, Saturday, Nov. 27, 2021, in Auburn, Ala. (AP Photo/Vasha Hunt)

The Auburn Tigers go into Tuesday’s Birmingham Bowl wanting to avoid ending a season with five straight losses for the first time in 71 years.

Auburn is 6-6 heading into the game against No. 21 Houston in head coach Bryan Harsin’s first season on the Plains.

Houston is trying to join the two other teams in program history to reach 12 wins in a season.  The Cougars had won 11 straight before losing to fourth-ranked and playoff-bound Cincinnati 35-20 in the American Athletic Conference championship game.

Auburn will be playing without former starting quarterback Bo Nix, who broke his ankle in the regular season then entered the transfer portal to join Oregon. TJ Finley will lead the Tigers offense.

The game is at 11AM CST Tuesday on ESPN.