Auburn fans were gathered around televisions in Montgomery to watch the Birmingham Bowl.

Fans had to witness another loss for Auburn football with this being the first time in 71 years that Auburn had a 5-game losing streak to end their season. They lost 17 -13 against #20 Houston.

We went out to Buffalo Wild Wings in Montgomery to see how auburn fans were feeling while watching the Birmingham Bowl. 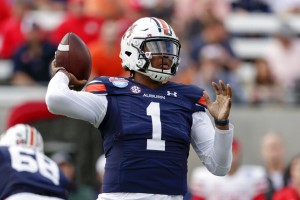 Auburn quarterback TJ Finley (1) throws a pass against Houston during the first half of an NCAA college football game Tuesday, Dec. 28, 2021, in Birmingham, Ala. (AP Photo/Butch Dill)

Even with the lackluster season, new Auburn Coach Bryan Harsin was still a fan favorite. Auburn fans Nowell White and Rhegan Allen had this to say

“Im optimistic with Coach Harsin,” stated White. “I liked what I saw with him, it kinda shows what we were lacking and then he just had to figure it out and the players had to change their systems and stuff.”

“I prefer Coach Harsin because I mean I feel like Gus was just in it for the money,” stated Allen. “He wasn’t there for the team, he just wanted the money.”

Even while watching the Birmingham Bowl unfold, Auburn fans were already thinking about next season and what it holds for the team in 2022.

“I think they just need to get the team and build them up,” stated White. “I think after this game Coach Harsin needs to see what he needs, look at the transfer portal, definitely needs some offensive and defensive line help and depth there.”

“I feel like instead of being there for each other they were kinda just playing for themselves and I think their coach could definitely make more practices so that they can kinda go over plays better and know what they’re actually doing and not just throwing the ball away,” stated Olesen.

Auburn fans are still optimistic for a better season going into 2022. We’ll just have to wait and see what they future holds for them.