Selma City Leaders Look to Clean Up the City

The city of Selma has some new equipment — and a new garbage ordinance — to try make the city a cleaner place to live — and visit.

Selma city leaders are making a push — to clean things up around the Queen City.

So, the Public Works Department has been able to get a bunch of new equipment — to help make it happen. 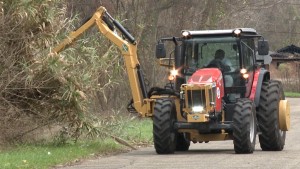 “We have side cutters, we have knuckle boom trucks, we have street sweepers, we have litter vacs, we have back hoes, we have excavators,” said Director Henry Hicks.

“We’re excited about where we’re headed with everything right now.”

Hicks says COVID slowed the delivery of the equipment — but now a lot of it is here. However, Hicks says the clean-up effort won’t be successful — unless residents get on board.

The ordinance makes having garbage service the responsibility of property owners instead of tenants.

Young says a cleaner Selma — will leave visitors with a better impression of the historic city.

The city council passed the ordinance on December 14th, it goes into effect 90 days after that.

Director Hicks says his department is waiting for six more pieces of equipment — to help with city beautification.