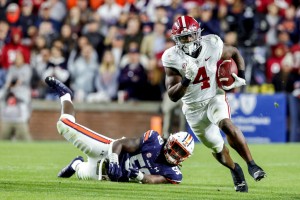 FILE – Alabama running back Brian Robinson Jr. (4) carries the ball against Auburn during the second half of an NCAA college football game Nov. 27, 2021, in Auburn, Ala. Robinson’s tough yet shifty running style has netted 1,071 yards and an SEC-best 14 touchdowns despite his missing one game and part of another because of injuries. (AP Photo/Butch Dill, File)

Alabama’s running game has been overshadowed in the buildup for the College Football Playoff semifinal against Cincinnati.

The ground production has ranked among the lowest in Nick Saban’s 15 years. The run game could still play a major role in the Cotton Bowl at AT&T Stadium in Arlington, Texas, on Friday.

The Tide plan to lean heavily on Brian Robinson Jr. The 1,000-yard runner leads the SEC with 14 rushing touchdowns and has the second-most carries in the SEC despite injuries.

The Cotton Bowl is at 2:30PM CST today on ESPN, with the Orange Bowl game between Georgia and Michigan following at 6:30. The winners of these games will play for the National Championship on Monday, January 10.