No. 3 Georgia Beats No. 2 Michigan 34-11 in CFP Semifinal, Will Face Alabama in Rematch 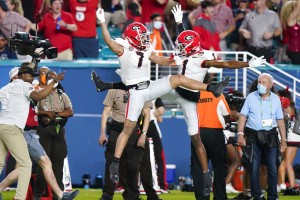 Georgia earned a rematch with Southeastern Conference nemesis Alabama in the title game on Jan. 10 in Indianapolis.

It was a little less than a month ago the Crimson Tide handed the Bulldogs their only setback of the season.

If there was any question about whether the damage from that humbling 41-24 loss would linger, the Bulldogs answered them quickly. Georgia became the first team in the eight-year history of the CFP to score on each of its first five possessions and led 27-3 at halftime.

Serena Williams says she is 'evolving away from tennis,' turning focus to expanding family and business interests