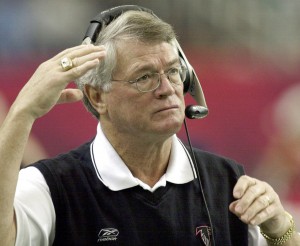 FILE – Atlanta Falcons coach Dan Reeves adjusts his headset at the start of play against the Detroit Lions at the Georgia Dome in Atlanta Sunday, Dec. 22, 2002. (AP Photo/Ric Feld, File)

Former Denver Broncos and Atlanta Falcons coach Dan Reeves has died at the age of 77.

His family says he died peacefully Saturday morning of complications from dementia.

Reeves won a Super Bowl as a player with the Dallas Cowboys but was best known for a long coaching career highlighted by four more appearances in the title game with Denver and Atlanta.

He teamed with John Elway to take the Broncos to three Super Bowls in 12 seasons.

Reeves also guided the Falcons to their first Super Bowl during the 1998 season, but he never won a championship as a coach. He also coached the New York Giants.