One year ago today, our nation’s Capitol was attacked by our own citizens, but what have we learned and can learn from this horrific act.

January 6 is a day of political division that will go down in the history books. 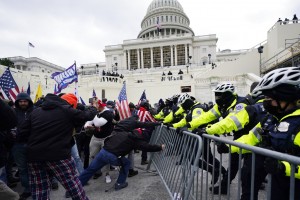 FILE – In this Jan. 6, 2021 file photo, rioters try to break through a police barrier at the Capitol in Washington. People charged in the attack on the U.S. Capitol left behind a trove of videos and messages that have helped federal authorities build cases. In nearly half of the more than 200 federal cases stemming from the attack, authorities have cited evidence that an insurrectionist appeared to have been inspired by conspiracy theories or extremist ideologies, according to an Associated Press review of court records. (AP Photo/Julio Cortez, File)

Many things have changed at the Capitol since the riots, including Capitol security, so that this incident will not place again. What else can we and future generations learn from this dark day in history?

With the one year anniversary, we took to the streets to ask the public what they think January 6 will mean in the history books. Marley Sanacory, Katie Graham, and Katie Kling gave us very interesting answers to that question.

“A moment where our country was extremely divided by hatred and pure division,” stated Sanacory. “How we can move forward and love each other and listen.”

“It’s just the political segregation that’s going on in the world is terrible and I think that we all need to come to an agreement on agreeing and respecting each other’s opinions,” stated Graham.

“When I look back, I hope that it’s a blip,” stated Kling. “I hope that its not indicative of the future, but it was a blip and hopefully a reminder that violence isn’t the answer.”

Over 700 people all over the country have been charged with participating in the January 6 riot. The FBI are still searching for the unidentified protesters from that day.