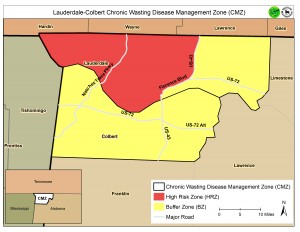 Image from Alabama Department of Conservation and Natural Resources

State officials have confirmed that Chronic Wasting Disease has been detected in a white-tailed deer in Lauderdale County. This is the first case of CWD in Alabama’s herd.

The deer was hunter harvested in west-central Lauderdale County.

“CWD was first detected in Tennessee and Mississippi in 2018 and has been moving slowly toward Alabama,” said Chris Blankenship, Commissioner of the Alabama Department of Conservation and Natural Resources (ADCNR). “The Department has implemented multiple proactive regulations to combat the spread into Alabama. Compliance from the public on those measures helped delay the spread into the state for several years.”

CWD is a progressive, fatal disease that commonly results in altered behavior due to microscopic changes made to the brain of affected animals. An animal may carry the disease for years without outward indication. In latter stages of the disease, signs may include listlessness, lowering of the head, weight loss, repetitive walking in set patterns and a lack of responsiveness.

“I would like to thank the hunters for their voluntary assistance in providing samples for CWD testing and we need hunters now more than ever,” said Commissioner Blankenship. “We take the presence of this disease very seriously which is why we developed a plan of action using CWD best practices to deal with the disease if or when it was discovered in Alabama.”

Due to CWD detection in Lauderdale County, ADCNR has enacted a new regulation for Lauderdale and Colbert counties, as outlined in Alabama’s CWD Surveillance and Response Plan.

MORE INFORMATION FROM THE ALABAMA DEPARTMENT OF CONSERVATION AND NATURAL RESOURCES

What the Tech? Which Apps Are Best for Playing the Stock Market?