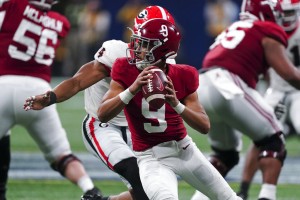 Georgia’s Stetson Bennett appeared better suited to play in the Sun Belt than the Southeastern Conference —- even when he returned to Georgia as a scholarship player in 2020.

On Monday night, the former five-star and the former walk-on arrive at the same destination when No. 1 Alabama faces No. 3 Georgia in the College Football Playoff championship game.

While their experiences have been vastly different, Bennett and Young share at least two obvious traits.

Both are undersized, listed at 5-foot-11 and under 200 pounds. More importantly, they are both confident that they are exactly where they are meant to be.