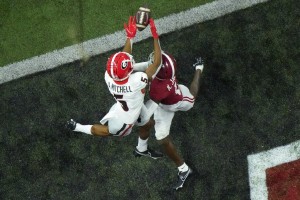 The final blow came from the defense. Kelee Ringo intercepted an underthrown deep ball down the sideline by Heisman Trophy winner Bryce Young and returned 79 yards for a touchdown.

Bama quarterback Bryce Young finished 35 of 57 for 369 yards with a touchdown and two picks. However, Young was without his top two pass catchers for most of the game. Jameson Williams went out with a knee injury, just as John Metchie had done when Alabama played Georgia in the SEC Championship Game.

Alabama finishes the season at 13-2.