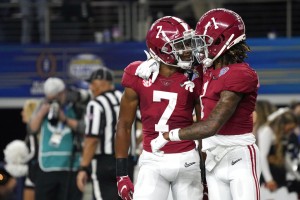 Georgia coach Kirby Smart sees challenges everywhere for his defense — even with Alabama missing one of its top receivers.

Alabama threw for 421 yards and three touchdowns in its SEC championship game victory despite losing John Metchie II in the first half.

Then the Crimson Tide went run-heavy in a CFP semifinal win over No. 4 Cincinnati.

While the Crimson Tide isn’t giving away any secrets about Monday night’s CFP title game, Smart realizes Alabama has plenty of talented replacements for Metchie.